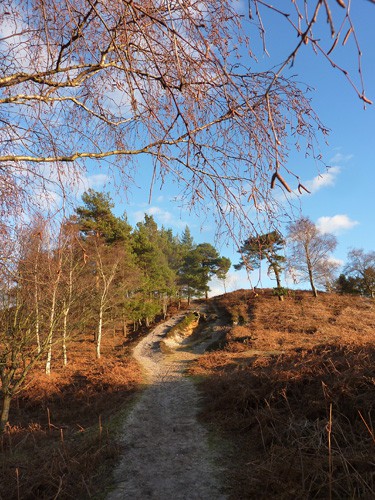 Moyles Court and Rockford Common on a beautiful sunny afternoon. Moyles Court House. Now a school, this was the home of Dame Alice Lisle, wife of Sir John Lisle, one of those who signed the death warrant of King Charles I. She was tried by Judge Jeffreys – the Hanging Judge – and executed for harbouring fugitives after the Monmouth Rebellion. The Moyles Court Ha-Ha under renovation. Trees have been allowed to grow through it over the years and it is in a considerable state of disrepair. The Ha-ha close up. The Ha-ha provided a defence of the garden from invading livestock while giving the occupants of the house an uninterrupted view of the parkland beyond. Climbing the hill above Moyles Court from the road. The path is sandy ahead of us – difficult to walk in! Three Tree Hill ahead. Sadly, none of the three Scots Pine trees remain. When I first moved here one still stood and there was another felled and lying next to it. Now, all are gone. The remains of the last of the trees is now lying here, some way down the hill. The sun is starting to set under the drooping branch of a Scots Pine. Ongoing Forestry works around the sides of Rockford Common is opening up the views. Looking over the Forestry works and remaining birch trees to the chimmneys of Moyles Court House. One of Rockford’s fine old birch trees. Known to me as Rob’s tree after one of my friends was unceremoniously removed from his horse by one of its lower branches.

The clearing weather leaves a confusion of clouds and dying sunlight. In the blanket above the broken cloud, a hole gives a view onto the blue sky beyond. A last view of the quickly clearing skies.