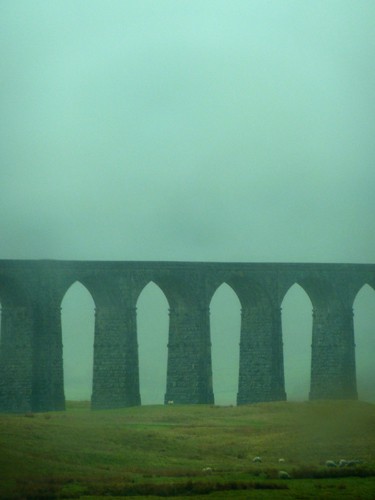 A last walk and we’re releasing our Travel Bug "Herdy" in a Geocache near Grasmere. Find out more about Geocaching and Travel Bugs at http://www.geocaching.com. Herdy is the emblem of an organisation that supports tourism and conservation in the Lakes. Based on the hardy Herdwick sheep found so frequently in that part of the world, Herdy displays the inquisitive and cute nature of this loveable sheep breed.

The weather had taken a distinct turn for the worse, but we made the most of being in the north and instead of heading for the motorway, we took a leisurely drive through the Yorkshire Dales despite horrendous weather before joining the major roads. After a walk in the rain from White Moss car park, we take in our last view of the Lakes bluebells for this year from near the geocache site. Looking out over the weir and Grasmere, the lower slopes of Silver How to the left and Helm Crag just visible over the top of the trees to the right – if visible is the right word on a day like today! On the road in Yorkshire now and a brief stop to photograph Pendragon Castle near Mallerstang. Reputed to have been founded by Uther Pendragon, the father of King Arthur. It was private land so we couldn’t get closer, but it was unexpected to find this so close to the road. The weather is so murky that the tops are mostly invisible, but the rain has brightened the greens. After a long period of very heavy rain we approach the Ribblehead viaduct, just visible through the downpour. From the other side of the viaduct, out of the rain now. A brief lift in the cloud and I think this is Whernside, the cloud lift was so brief that I was never really sure! The cloud is down again, but this lovely field system and the green of the meadows is highlighted by the dark clouds above. Leaving the dales behind as the weather closes in still further, we head off to the M6 and home, aware that we should have seen Pen-y-ghent and Ingleborough too.

A dramatic end to another lovely holiday in the North.