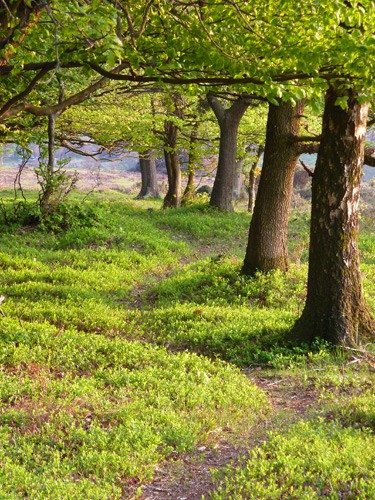 Spring trees at Linford in the morning and all is green Ridley Wood as well for our evening walk. I’m searching for bluebells to photograph, they are few and far between here and so not the best photo opportunity. However, Harry tiptoeing through the bluebells is just as nice and almost a cue for a song! The path through the Little Linford Inclosure. It just makes you want to follow it, doesn’t it? After walking through the inclosure and following the edge of Pinnick Wood round to Linford Brook, we follow it back down towards the car park. After so much dry weather, the brook is very dry, although still running. I love the shape of these oaks on the main path beside Great Linford Inclosure. In their spring green, they look especially graceful.

In the late afternoon, we head across to park at Vereley and walk down to Ridley Wood, a haven full of huge beech trees, for a peaceful walk around this glorious woodland. Approaching Ridley Wood. This path is usually quite wet, the recent dry weather has made it very pleasant walking instead of the usual hop, skip and jump when not wearing wellies. The new growth of biberries or blaeberries is much in evidence here. They love the peaty soil and (usually) damp environment. Looking towards Sir Dudley’s Ride below the trees in the distance. Named for Sir Dudley Forwood Bt in recognition of services rendered to the New Forest when he was the Official Verderer 1974-1982. Before he moved to the Forest he was the sole equerry to the Duke of Windsor after his abdication in 1937 until the outbreak of war in 1939. After skirting the edge of Ridley Wood for a way, I turned to move into the woodland and caught sight of this roe deer grazing. Unaware of me, she started to walk towards me. It was rather dark under the tree canopy, so my camera found the light a bit difficult for a clear picture. This one was the best of them, she had just become aware that there was something potentially dodgy ahead of her. She also seems to be losing her winter coat. After cutting through the whole of Ridley Wood, which was just too dark for any photos, we emerged on the north west side of the wood into the sunshine. The bilberries here are so numerous that they form a bright green carpet around the path we’re following. This place deserves a visit when the bilberries are fruiting! New grass growing on the areas that were burned off by controlled burning a couple of months ago. Areas of the Forest are cleared of gorse or heather in this way. Nature soons asserts herself. This birch tree on the edge of the burned area has suffered a little from the flames. Hopefully it’ll recover as quickly as the heathland. At the bottom of the path as we leave Ridley Wood is the old ‘Market Place’ A gully in the trees that was apparently one of the places in the Forest where the smugglers in the 18th century would sell the contraband that they had brought up the Smugglers Road having landed it on the coasts around Christchurch and Bournemouth. Read more about Smuggling and the New Forest here. Dandelion Clock on the edge of Mill Lane Brook. As we head back to the car we are treated to a rather pretty sunset. What a way to round off the walk.