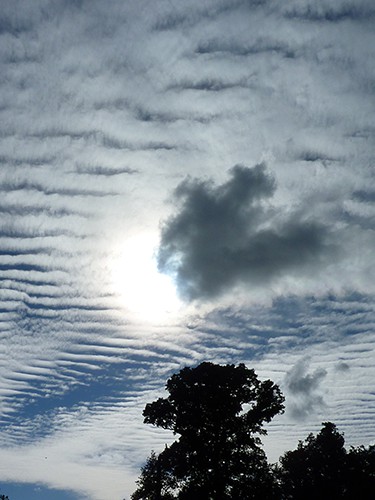 We headed over to Dur Hill Inclosure to see if we could find some outsize fungi that populated one area a couple of years ago. Although we didn’t find those, we did find a lovely sunset, which was very unexpected.

Before we get to Dur Hill, a couple from the night before: I’m not sure what this is – the nearest I can find is the Common Yellow Russula, but I’d be happy to be put right if anyone knows?. As with everything this year – flowers and fruit – there is an abundance. This Sweet Chestnut tree is laden with fruit. The sky in the late afternoon from home, a true mackeral sky. Note the tree – do you see the cartoon character?.

The sky in the west, not promising for a sunset tonight, but a fantastic array of clouds. As we head away from the car park, this huge cloud recedes away to the north east. In the west, the heavy cloud on the horizon splits and the sun starts to make a show of itself. When I first moved to the area twenty-odd years ago, Dur Hill Inclosure was all trees. Clearance a few years ago has left it far more open and much of the cleared areas are now heather clad slopes. A little forest pond that I’d never found before. The delights of the Forest, there is always something new to see. The outsize fungi we were looking for are not in evidence this year, but there is plenty of other fungi to delight the eye. Another that I don’t know the name of! The sunset that seemed like it wouldn’t be is starting to hot up with orange rays of light cast up into the heavy cloud. One of the old gates into the inclosure, now thrown open to the rest of the Forest. The clouds on the horizon have taken shape and are now lit around the edges by the dying sun. Zooming in, a gold rather than silver lining. The clouds a little round to the north are blown by the winds and look like smoke billowing away. As we turn onto the path back to the car, the sun has gone and left a wild array of orange and purple silhouetting this birch tree.